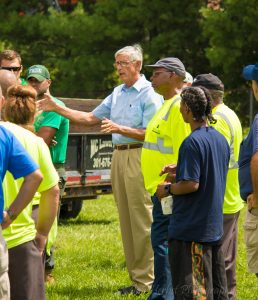 Municipal governments must collect leaves from trees in the autumn and the disposal of those leaves presents a significant challenge due to the volume (thousands of tons) that must be handled in process of making them “go away.” There isn’t enough land to simply dump waste leaves, particularly on a recurring annual basis. Composting converts those leaves into a beneficial humus; however, the production of compost necessitates the turning of long, large windrows of leaves for aeration. The use of large loaders or other bulk handling equipment is both slow and compacts the leaves which retards the composting process. Since the volumes are great, the cost per unit of compost is a formidable consideration.

Teates developed a methodology that applied to the leaf issue as well as other organic materials. The challenge was two-fold; how to remove the leaf collection from the dump site and what to do with it so that the site was available for the next season.  Grove Teates examined the overall process, noting the need for aeration and for “fluffing” the leaves as they become compost. He designed and patented a large, towable compost turning machine which straddles the 12’ wide windrow and turns them with a large, rapidly rotating drum, tossing the leaves into the air and reforming the windrow. The 1,000-tons-per-hour capacity allows large amounts of leaves to be turned, which permits the frequent aeration of leaves to hasten the generation of compost. Turning the entire collection weekly or monthly with conventional equipment was very costly and time consuming, but necessary to provide oxygen to the compost-producing bacteria.  The cost per cubic yard for turning was reduced from dollars to cents.

The materials were composted and the resulting compost was sold. This was accomplished via a marketing campaign designed and implemented to sell the resulting high-quality compost. This project converted a waste product into a desirable and usable consumer material which is valued and sought by the marketplace.