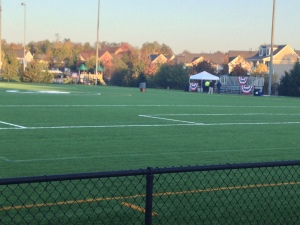 Alpine recently completed the base for a cool synthetic turf field for the City of Gaithersburg, Maryland. The field, in the Lakelands Park community, is guaranteed to be no more than 10 degrees above the ambient temperature at all times.

The temperature guarantee is possible because of coconut husk and cork infill used in the turf. The lack of excess heat on hot summer afternoons makes this type of turf field safely playable more hours per week than fields with black, rubber infill.

The Gaithersburg field is the second of its kind to be built in the Baltimore-Washington area. Alpine built the first one as well – in 2011 for St. Timothy’s School in Stevenson, Maryland. St. Timothy’s tested the temperature of its field and found the guarantee to be valid.

The infill in these cool fields is environmentally friendly, too. It can be safely used as soil amendment in vegetable gardens. Therefore, at the end of a synthetic field’s 10 year life, there is no issue of how to recycle the infill, unlike those built with rubber. Also, there is no negative effect to applying it to any natural turf area.

This same natural infill also makes the footing more natural and, therefore, safer for athletes playing on the turf.

Cool synthetic turf field technology has been used for many years in Europe and is now making its debut in the United States. As awareness of natural infill increases, we expect to be building many more cool fields.