The following challenges and cost-saving solutions are presented as examples of Grove Teates’ past work. In each case, Grove was able to develop a solution that saved time and/or money. In some instances, he addressed needs that were not necessarily specific to athletic fields, including efficiency, economy, methods or operations.

The Problems: Drainage ditches are installed in the sub-base of athletic fields as they are built.  They typically have a pipe or flat drain in them and are then backfilled with sand or stone. Some fields may have up to 10,000 feet of drain in them and the ditches may be from 4” to 18” wide. The usual practice was to install the pipe and then scoop the backfill material with skid-steer loaders, haul it, and then turn and dump the material into the ditches. This process is slow since the skid-steer machines must move long distances.  Plus, they significantly roughen the smooth surface of the field when they turn to dump into the ditches. The haul time and field surface re-grading was expensive in field production time.

The Solution: Teates designed and built a 3-point, hitch-mounted device which allowed continuous filling of the ditches. Loaders fed the device without having to turn on the field’s surface. This device cut the drain backfill time in half for this portion of athletic field construction. 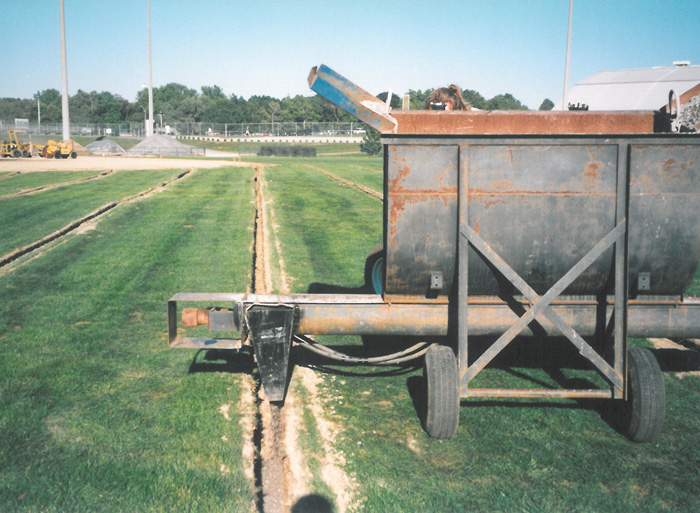 Trench back filler in continuous operation.

The Problem: After years of use and of aeration, natural-soil athletic fields develop a hard layer of soil about 6” below the surface. This layer, called the plow layer, impedes the natural upward and downward flow of water in the soil.  Plants are harmed when water can’t flow both ways.

The traditional way to reduce/remove the plow layer was to drag a chisel plow through an athletic field’s top surface and plow layer.  Disturbing the surface, however, necessitated that the field be rebuilt, taking it out of service for an extended period and creating significant cost.

The Solution: This challenge was conquered by implementing a method of fracturing the hard layer of soil from below (max. depth was 72”). Grove devised a way of discharging high-pressure air at a depth of 24”- 36” under the surface, which broke the plow layer but did not distort a field’s graded surface.

Grove’s procedure allowed water to penetrate downward without disturbing the surface of an athletic field. Significant savings resulted from not having to rebuild fields. 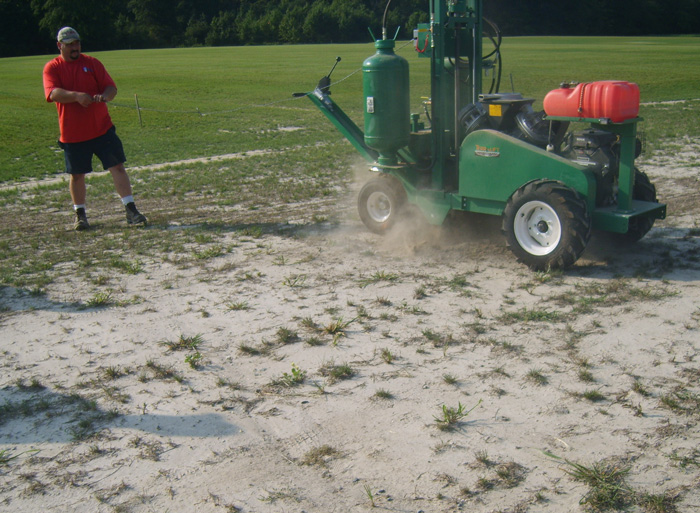 The Problem: One of the most important times in the life of a new natural-grass field is immediately after a contractor delivers it to the owner when critical elements are still coming together — grass must be established, the irrigation system must function properly when it is needed most by the new grass, chemicals and fertilizers must be selected and carefully used, etc. These needs must be addressed daily by an experienced person who is responsible for the new, very large investment; failure is highly visible and very expensive. The owner may not know the requirements of the job to be filled nor what to ask of a person applying for the position of groundskeeper; there is little room for error. Therefore, it is important to hire the “right” person for this job.  A field owner recently retained Teates to recruit a groundskeeper for a new athletic field.

The Solution: Teates interviewed prospective candidates for the groundskeeper’s position and filled it for the client. By having Teates perform the search, time was saved, and, more importantly, the right person was selected from a crowded field of candidates. This new field was left safely in the hands of an experienced person and the owner could relax, confident that his new investment would be properly maintained.

The Problem: Soils that have many small roots in them, or soft soils that have fibers added to them to make them firm, are difficult to grade accurately. The roots or fibers hang on the grading blade and immediately bunch into piles while grading which makes accurate grading impossible. Athletic field renovation projects are plagued by these challenges, which consumes production time and produces root-filled waste which is expensive to dispose of. In spite of this problem, accuracy is a must for the finished field surface.

This was achieved by using a rotating auger which was laid on its side; it rotated against the soil and was carried by a laser-controlled grader to yield absolute accuracy. The cutting edge (auger flights) rotated rapidly as the rotating spiral flights moved against the ground, shearing the roots and fibers and grading the soil as the flights moved sideways along the length of the auger (12’ wide). This machine permitted fields to be graded that otherwise would have needed to be excavated and replaced with clean soil, thereby saving thousands of dollars.

The problems noted above indicate that Teates is fully capable of thinking “outside the box” to develop innovative solutions to different kinds of difficult issues. This same type of thinking applies to every issue that he addresses. His experience in the field when coupled with his observations and evaluation of human behavior in various situations allows him an unprecedented ability to address difficult problems.