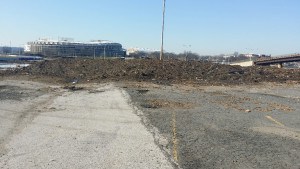 When a winter storm dubbed Snowzilla dropped 19-24 inches of snow on Washington, DC, in 29 hours on January 22-23, transportation officials scrambled to clear the streets. It soon became apparent that the usual method of plowing snow wouldn’t work due to the volume. City leaders had little choice but to truck snow from the streets to RFK Stadium’s Lot 7, which became the godfather of snow depots featuring a pile that measured approximately 20 feet high, 150 feet wide and 1,200 feet long.

And then it sat. For six weeks.

In spite of some unseasonably warm weather and torrential rains, the piles persisted. In fact, gravity and freeze-thaw cycles compacted the snow to a density sufficient to withstand the weight of heavy equipment driving over it. Eventually the snow would melt, leaders thought, but they soon realized it may take a very long time. 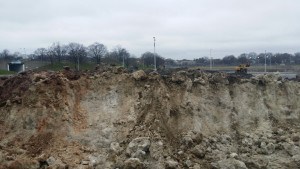 ast-forward to early March. The city no longer had the luxury of waiting for the Lot 7 glacier to melt because the space would be needed for parking at an all-day, nationally televised boxing event scheduled to take place at the DC Armory on April 1. Large crowds are expected for a full card of matches that is to culminate with a world-title bout between Adrian “The Problem” Broner and Ashley “Treasure” Theophane.

City leaders put out a request for proposal to have the snow, which was mixed with debris, hauled away to approved dump sites. Rough estimates indicated that it would cost many millions of dollars and require an armada of dump trucks to transport 12,000 loads to open areas in neighboring counties. There were also concerns about debris disposal, environmental impacts, and controls issues, none of which typically gets resolved quickly. 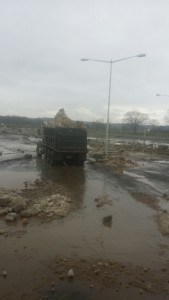 Alpine Services, Inc., received the city’s RFP and Alpine’s president, Grove Teates, was in the midst of submitting a bid when he got an idea.

“Why are we talking about trucking all of that ice to other places?” he asked himself. “Why not just spread it out and let the sun, wind and rain do the work for us?”

Before he submitted an alternative plan to the city, he surveyed Lot 7 and found about five acres of open tarmac where he could start spreading it. He reasoned that moving snow to the open areas would soon expose more areas where additional melting could take place. He quickly wrote an alternative approach that would, if it worked, save millions of dollars.

“The volume of snow was impressive at first sight,” recalled Teates. “I did some calculations to estimate how much snow was there and figured that if we had normal March temperatures and rainfall, and worked 12 hours per day, it would be possible to clear the lot before the city’s deadline of March 25.”

The city was convinced, issued a contract to Alpine Services and work began on March 9. A large excavator was first used to break the frozen crust on the pile so that loaders would be more efficient. Dump trucks were loaded and driven to the far reaches of the parking lot where they dumped the snow while moving to spread it onto the parking surface. At the same time, large wheel loaders scooped and hauled snow from the pile to closer areas. A road grader distributed the snow to an 8-12-inch layer on the asphalt, being careful to keep some areas of the asphalt exposed. 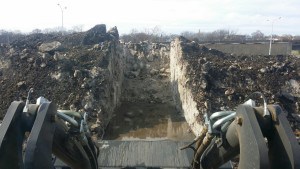 “Solar gain warmed the asphalt and melted the snow adjacent to it,” explained Teates.

“I think everyone was surprised by how much debris was in the snow,” said Teates. “After it melted we hauled away 40 22-ton loads of soil, trash and muck.”

Things went well and Lot 7 was cleared before March 25. City leaders were pleased. They praised Alpine Services for its creative problem solving and ability to deliver on time what it had promised.