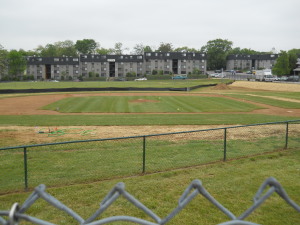 If you have played or watched baseball or softball you are probably well aware of an all-to-familiar problem that is the bane of many an outfielder. It’s called “the lip.”

Over time, excess soil tends to build up along the arc where the turf outfield meets the dirt infield. If a batted ball hits the lip, it may bounce erratically, possibly causing injury to athletes.

After the TopMaker did its magic, Alpine upgraded the infield soil by installing a special ball diamond mix intended to moderate moisture in the soil, thereby making it playable sooner after rain and keeping it moist longer in dry weather.

Alpine then laser-graded the entire skinned infield, making it true and safe. After grading, the final step was to wipe all tracks from the infield via a light, wide drag. The fields were left ready for the installation of bases and play.