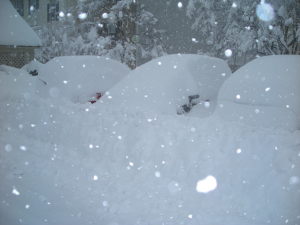 Four years ago this week, suburban Maryland experienced the biggest snowfall in its recorded history on February 5–6, 2010.  A three-day snow event that brought 30-50” of snow with significant wind to pile it, dubbed Snowmageddon, paralyzed much of North America.  The Interstate 495 Beltway around Washington, D.C., was impassable with only one lane open which zigzagged across the space where 4 traffic lanes once existed.

State road crews were severely hampered; they ran plow trains (snow plows that operate in a staggered formation, one behind the other and to the side) to move the snow from the roadways.  There were nine trucks in each plow train; they could not push the accumulated snow across the 4 lanes; the highway department lost two and sometimes three lanes plus the shoulder because of deep snow,  which prevented further plowing (there was simply no place for the plowed snow to be deposited).  The one or two lanes that were opened were restricted in use by the State governor who had declared a state of emergency.  There was no commerce—closed interstate highways are serious matters and many people are quickly inconvenienced.

Big blowers, including ours, were able to work nonstop to clear back the plowed snow on the closed lanes and shoulders; highway plows were then able to clean the roads onto the recently blown areas and open lanes, and the cycle was repeated many times until the highway system was again functional.  Then, since the blowers were simply hired for the occasion, they were released from the system and returned to their origin, which minimized the charges to the state.

It should be noted that large wheel loaders were hired by the state also; some were pulled into the area from Florida (at considerable expense).  The blowers were magnitudes less expensive, moved many times more tons of snow quicker, could move the snow significantly further from the shoulder, and did not need dump trucks!

The concept of using large blowers, which Alpine initiated in 2003, was proven sound in a very meaningful way.